Initial weights for both winter weights and spring thaw weight dates are subject to change based on current road conditions. Always check the state's website or the appropriate department of transportation for the latest information.

Many states appear to be deliberately vague about actual weight restrictions, preferring case-by-case decisions and limitations. Information may only be available by contacting the states highway department. The following table, from North Dakota, however, appears to be typical of the weight restrictions issued in many states. The axle weights are determined by actual conditions of temperature, moisture content in the soil, and observed road conditions. Note that several weight limits may be in effect in different parts of the state.

Initial weights for both winter weights and spring thaw weight dates are subject to change based on current road conditions. Always check the province's website or the appropriate department of transportation for the latest information.

It's all about the roads!

To strike a balance between protecting roadways during the spring thaw and allowing trucking operators to maximize their loads, northern US states and Canadian provinces have engaged in a process that seems to combine scientific analysis with reading tea leaves. Today, however, the science is much better, and application of "Frost Laws," also know as "Seasonal Weight Restrictions," have demonstrated that it is possible to strike a functional balance between protecting and preserving critical highway infrastructure and optimizing trucking operations.

In climates that experience below-freezing temperatures, damage to roads from thaw-weakening have led many US states, Canadian provinces and other jurisdictions to enact laws that restrict vehicle loads during spring months, when road structures are thawing, thereby weakening the pavement underpinnings. During the months of March, April and May, Michigan, for example, may reduce legal axle weights by as much as 35%. Some states and local governments may also limit heavy vehicle speeds to a maximum of 35 miles per hour, regardless of the posted limit.

Most major highways are laid down in three layers. The top layer is the pavement that averages four to six inches thick. The pavement is supported by a base layer and a subbase layer. Together, these three layers can be up to a meter or more in total depth. Also, the roadway structure is flexible. Excessive weight exerted by overloaded axles (or a weakened supporting base) can cause the pavement to bend or deform. The strength of the roadway system—its resistance to "bending"—determines the weight the roadway can bear.

Road building technology has improved over the past decade. The most obvious winter damage is the occurrence of potholes that are the result of moisture in the pavement freezing and weakening the top layer of the road. Modern roadbuilding materials significantly reduce the amount of moister retained in the top layers, reducing the occurrence of pot holes. The base and subbase, however are still subject varying amounts of moisture, influenced by rain and melt water in the spring. 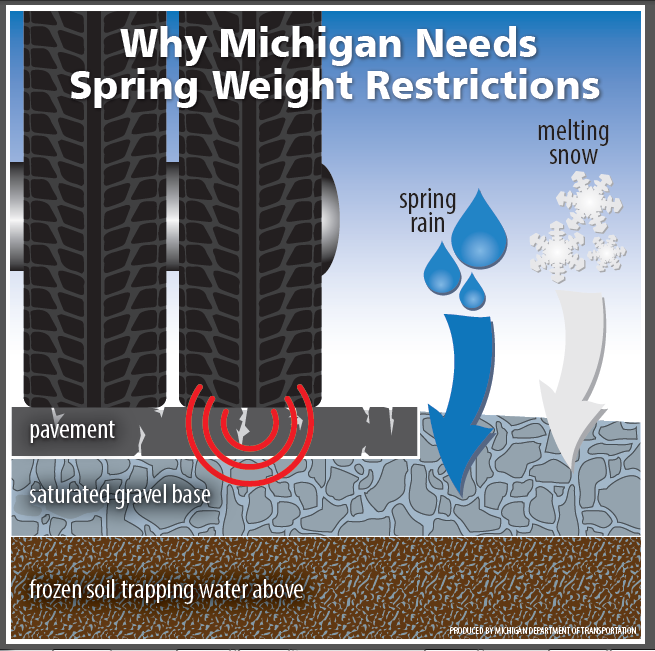 This illustration from the Michigan DOT illustrates typical road bed construction. The "gravel base includes the base and subbase layers. (Source: Michigan DOT)

What are Frost Laws?

During the spring thaw, the roadbed is softened by trapped moisture beneath the pavement, reducing the supporting strength of the road to less than the original construction strengths. As the excess moisture evaporates or drains away, the road bed will stabilize and return to normal design strengths.

Because of the variability of temperatures from year to year, states and provinces must manage weight and speed restrictions on a seasonal basis to both protect and preserve roads and ensure maximum access to trucking interests.

"Seasonal weight restriction" typically start in early March and continue through mid-June. Since conditions vary from year to year, from below-normal to above-normal temperatures, most states and provinces reserve the authority to adjust spring load restrictions based on observed seasonal rain and temperature conditions, weather forecasts, as well as soil moisture sampling, to determine the dates for setting and removing weight restrictions. Weight restrictions remain in effect until sufficient moisture has escaped and the roadbeds regain stability. The most significant pavement damage occurs during the first four weeks after the onset of spring thaw.

Some states plan seasonal weight restrictions. For example, Pennsylvania schedules restrictions from February 15th to April 15th based on years of weather data. However, they reserve the authority to post additional restrictions due to unforeseen severe weather conditions.

North Dakota takes a different approach. It uses temperature probes in the base layers of pavement sections, long range temperature forecasts, and sensors in the pavement to evaluate the strength of roadway bases to forecast when load restrictions should be imposed or removed.

A review of state departments of transportation indicates 16 states have seasonal load restrictions. In many states, seasonal weight restrictions are managed by local governments or jurisdictions. Most Canadian provinces also have established spring thaw speed and weight laws.

Note: The strength of a roadway is affected by moisture in the base materials supporting the roadway. The condition of road surface—moisture or frost on the roadway—does not affect roadway strength.